But rather than hope that the extraterrestrials have launched signals our way, let’s knock on their door — and get their attention.

For more than six decades, a small group of scientists (including me), has been trying to pick up radio transmissions from other planetary systems, motivated by the fact that doing so would demonstrate that someone intelligent is out there. This effort, known as SETI (the Search for ExtraTerrestrial Intelligence), is straightforward and technically fairly simple, as it doesn’t require interstellar travel for either the aliens or the earthlings. It’s a strictly passive endeavor that uses big antennas with highly sensitive receivers to sniff out signals over a broad range of the radio dial. Case in point: Reports this week say Chinese researchers may have picked up signs of alien civilizations (or maybe it was just radio interference.)

Rather than hope that the extraterrestrials have launched signals our way, maybe we could knock on their door and get their attention.

In any case, some researchers believe we should be taking a more active role in probing nearby space. They argue we should prod the aliens with signals of our own, inviting them to respond; an idea known as “active SETI.” Rather than hope that the extraterrestrials have launched signals our way, maybe we could knock on their door and get their attention.

In practice this amounts to sequentially aiming a powerful radio transmitter at one star system after another while transmitting a friendly message (perhaps similar to the engraved plaque that was affixed to the Pioneer space probes in the 1970s) that, one hopes, will trigger a similarly friendly response.

This sounds straightforward, but it still requires some decisions to be made. To begin with, how do we encode the message in a way that space aliens, whose English-speaking abilities are surely sub-par, will understand? In addition, what information should we transmit? Shakespeare’s plays? The books of the “Harvard five-foot shelf”?

Recently, a new idea about cosmic signaling has appeared. It’s the work of a global team of researchers led by Jonathan Jiang of the Jet Propulsion Laboratory in Pasadena, California. Like many of its predecessors, the new communication scheme harkens back to the short pictogram transmitted from the Arecibo, Puerto Rico, radio telescope in 1974. Mathematics, physics, astronomy and biology are the touchstones for these pictograms — all subjects that are presumed to be required coursework for extraterrestrials. We won’t share a common language with advanced aliens, but we can safely presume a shared familiarity with science and math.

However, the idea of trying to initiate contact is not looked upon kindly by everyone in the research community; critics of this more aggressive approach see the possibility of a calamitous outcome to betraying our existence to unknown beings. It’s been likened to shouting in a dark forest. The potential consequences could be dire, so we mustn’t take chances. We should keep our heads down.

This a popular point of view — it was even endorsed by Stephen Hawking. But I don’t agree. Laying low might seem like cheap insurance against catastrophe, but my opinion is that the potential costs could outweigh any potential benefits.

Homo sapiens might (might!) be around for a long time, and insisting that we never, ever point a powerful radio transmitter skyward could prove to be a weighty albatross burdening our descendants.

Remember, we can only be threatened by species that have the means to either come here or send their weaponry our way. Either option demands a degree of technical sophistication that’s far beyond our own. And if such aliens are already that advanced, then they can be presumed to have large antennas and sensitive radio receiving equipment, and to have had such technologies for a while. That means that irrespective of their personal natures, they can likely detect the television, radio and radar signals we’ve been lofting skyward since World War II.

In other words, it’s entirely too late to worry about giving away our position. Additionally, if we were to agree that attempts to signal unknown aliens should somehow be forbidden, what happens when we establish colonies or way stations elsewhere in our solar system? Do we set limits on any transmissions to these outposts because of the inevitable “spill” radiation that would continue into deep space? And what about the use of radar for establishing the orbits of long-period comets as a matter of defense against the type of deadly impact that doomed the dinosaurs? Do we give that up, too?

The paper from Jiang et al. describes in detail a scheme for sending an informative postcard to other Milky Way inhabitants. The public reaction to this work has been modest, and much of the press coverage has fixated on the proposal to include images of nude humans. One might conclude from this reporting that the real issue with active SETI is the impropriety of transmitting images of humans in the buff. In other words, guardians of terrestrial decorum seem less concerned about possible destruction of the planet than with keeping aliens from seeing what we look like underneath our clothes. From my point of view, both worries are wacky. 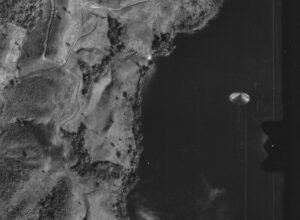